I’ll Be Playing With Dragons

Posted on 23 February, 2021 by Sequoia the Storyteller 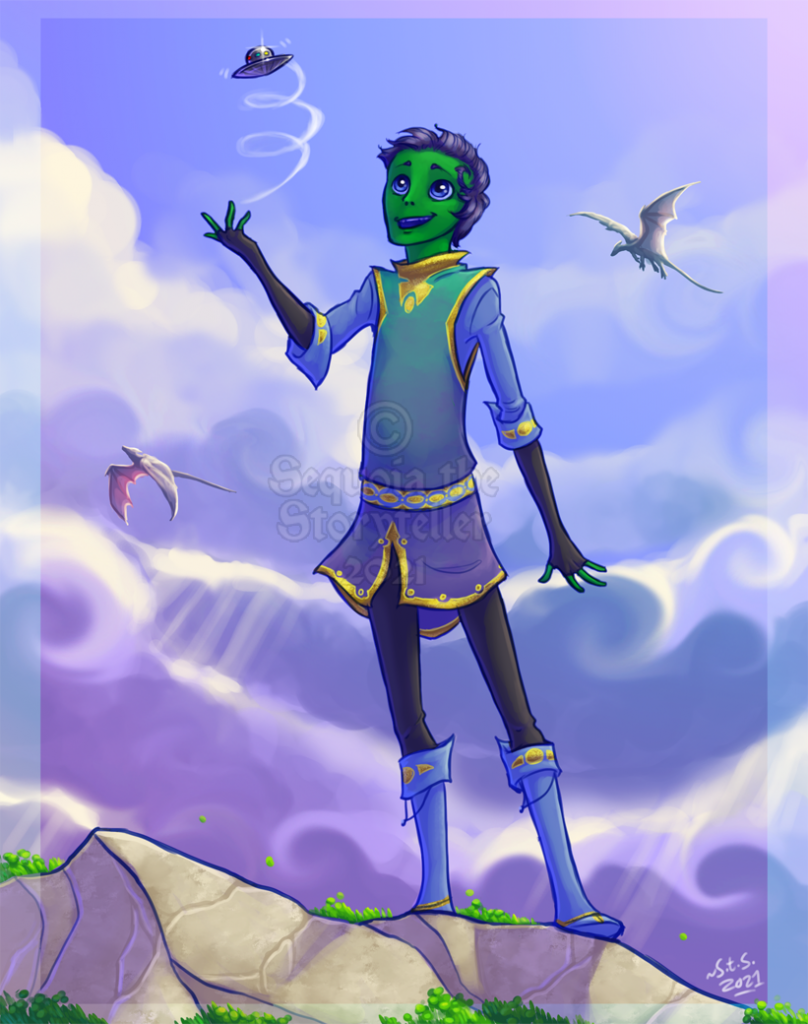 I’ll Be Playing With Dragons

I just LOVE this little alien. He is my favorite alien. Uncontested, as of this day. <3 He originated in a small story concept I came up with in 2013, which was about an alien landing in a fairytale world in his spaceship. As I recall, the working title was “Being Green”.

This was originally put forth as a WIP in this Doodle-Dump. :3

Posted on 29 January, 2021 by Sequoia the Storyteller

I’ve been hankering to do another one of these dumps lately. 😛 I had a backlog of doodles and sketches and WIP’s that were just kind of asking for it, ha. Here’s at least some of those! Hope you enjoy. :3

Posted on 17 January, 2021 by Sequoia the Storyteller 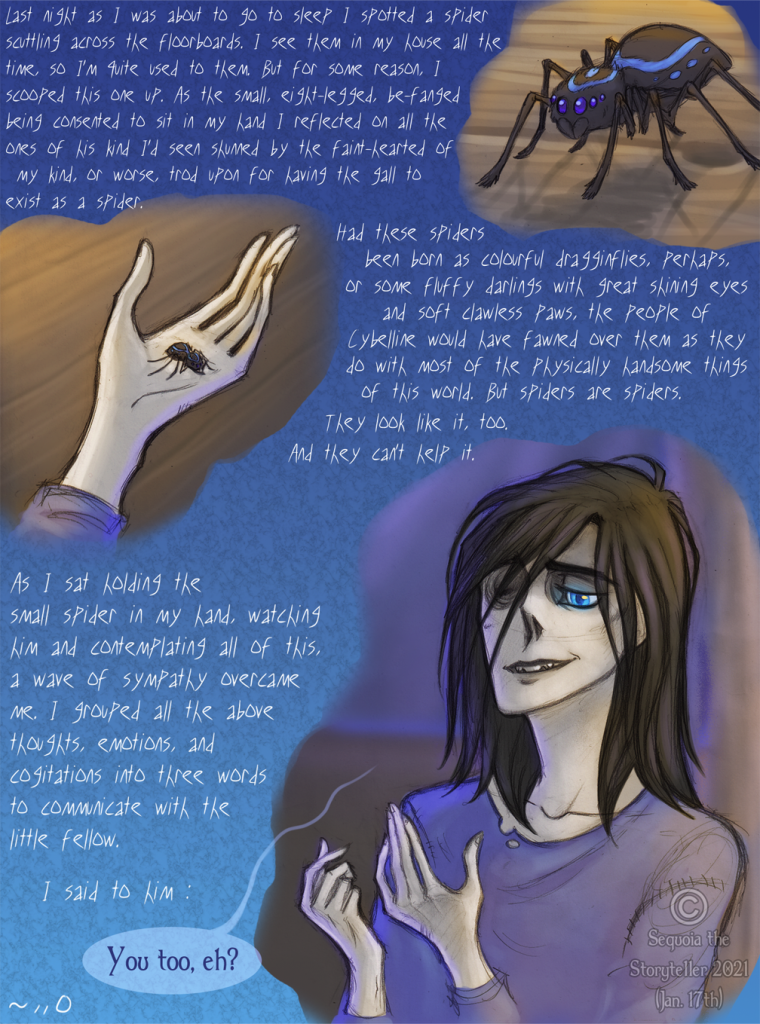 Today (Jan 17th) is Masky’s “birthday” so of course I had to do a Thing. ^w^ It seems that this makes it 12 whopping years since this highly-inspirational lady entered my sleeping mind, and if I’ve counted correctly(!), she is 35 years old in real time. 😛

As to the SUBJECT of this. Oh MAN, you guys, I have had this concept kicking around for at least EIGHT YEARS… Masky wrote this little journal entry about her bonding-moment with a spider waaaaaay back in 2013, and here’s the proof (“consider it a sneak-peek”, indeed! Took long enough for the FULL peek!! xD). Back then I made a number of attempts to illustrate this scene in various ways, and could never seem to feel satisfied with any of them. Which is why this bit of Masky’s journal is eight years late to the world’s eyeballs. x’D

(Hopefully the text is readable… it’s that font I made out of Masky’s handwriting again :’D)

Posted on 1 January, 2021 by Sequoia the Storyteller 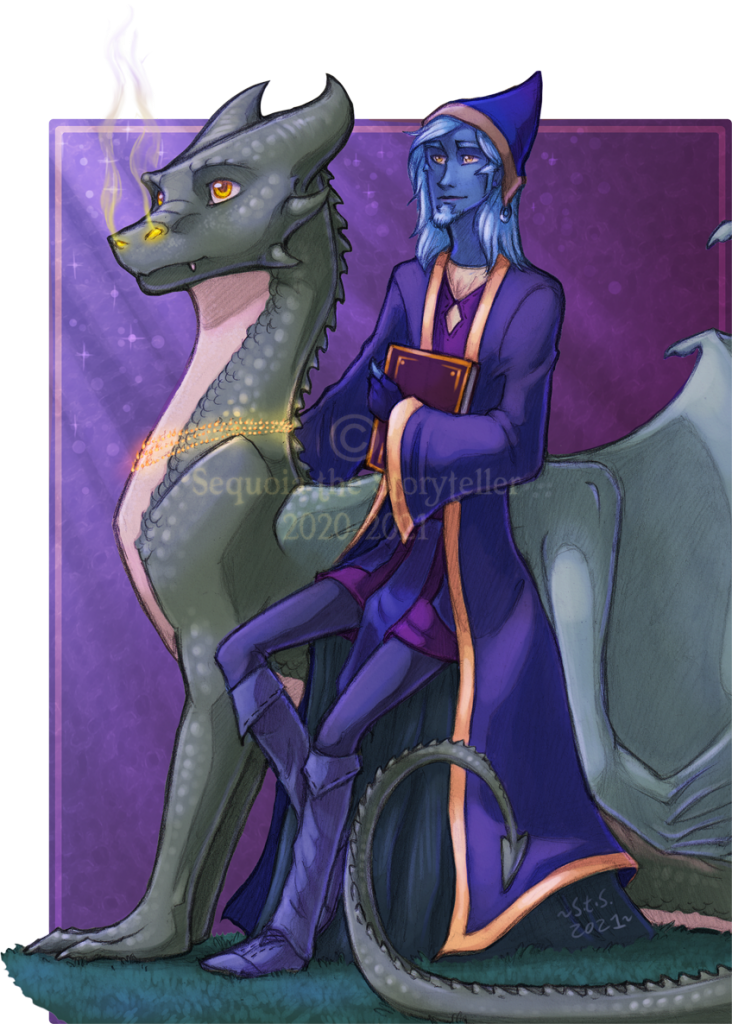 My “New Year’s Doodle” which I started drawing in the last hour of 2020, and carried on drawing as 2021 took over. 😀 I guess the following things: I was reflecting on the actual positive stuff I personally experienced in 2020… which in large part was Accidental Elemental getting giant developments… and also feeling “tentatively hopeful” about the year to come. So therefore the result is two AE characters looking like they might feel that same feeling, ha. =P

Help, you guys, I love drawing these two together, aaaa. <3 Even if some of these depictions might depart from the actual canon of the story to some degree or other, I can’t help it anyway. 😀 Perhaps one day, when AE has a far greater page-count than today, it will become clear why. ^w^

(The only thing I don’t really fancy about this drawing is how everybody’s legs seemed to come out rather twiggy in proportion to the rest of them… I managed to do that to both of them and not realize until it was too late. (shrug) Guess it was just time for a Twiggy-Legged Drawing. xD )

Trotting in the Air

Posted on 27 December, 2020 by Sequoia the Storyteller 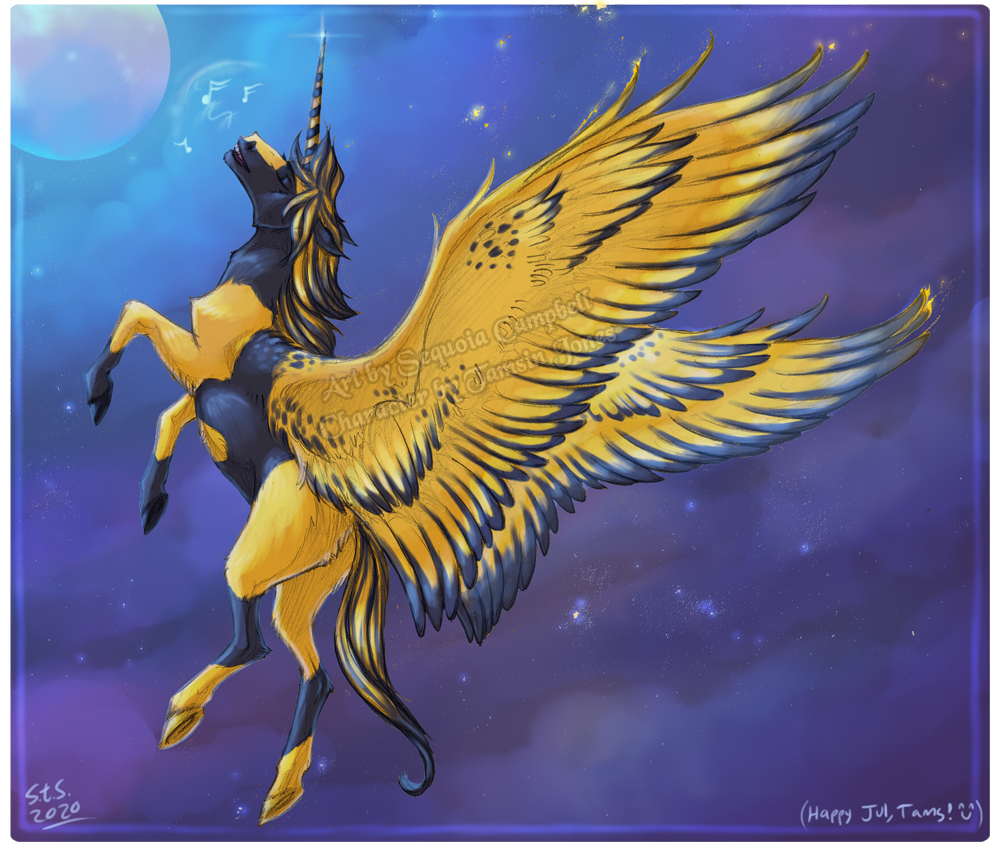 Trotting in the Air

This was a holiday-gift of sorts for my dear friend Tamsin, who really did play a huge part in keeping me sane this year, so I figured I needed to give her something! Pictured is her character Night Shadow the Pegacorn, whom I’ve had a hankering to draw singing ever since Tams told me she is given to doing so!

Apparently she has a very epic-sounding voice, too… like the lady singing this song! –> https://www.youtube.com/watch?v=AaWPduHl_j8 (I imagined Shaddie was singing this very song in this drawing, hence why I called it “Trotting in the Air”… because… horse. xD )

Posted on 21 December, 2020 by Sequoia the Storyteller 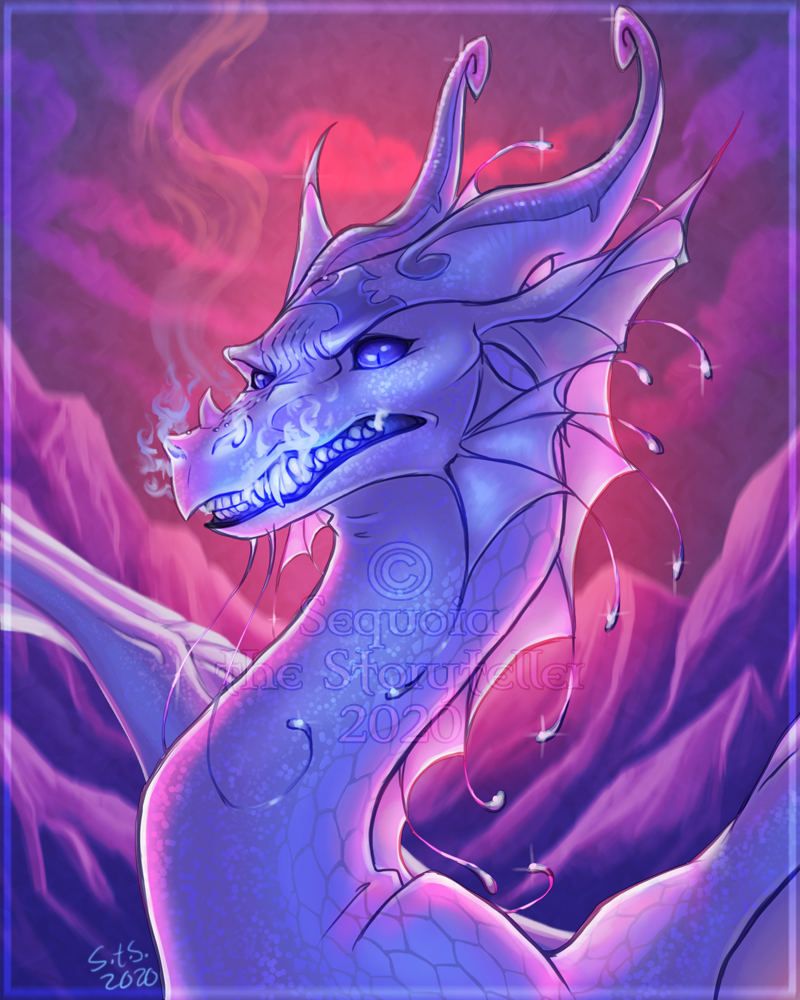 Seems like this has been a rough year on everyone, and I am no exception… I don’t tend to talk about my real-life baggage on the internet much, so suffice it to say that my soul is currently rather raw from the sheer amount of dysfunction/toxicity I’ve been stuck dwelling in this year. Stressors from Covid and all-virtual-university challenges are only the top layer.

So, it was time for TEETH. Drawing Dragon-Sekoiya’s big snarly teeth in this vent art was seriously cathartic, no kidding! Wish I could actually use those teeth and her menacing face and her seething fire to scare ALL the dysfunction away.

Anyway, on a lighter note, Happy Solstice everyone. :’3 Here’s hoping next year will be better for all of us!

PS: And on a completely unrelated note: Wow, how come I’ve been drawing so much pinky/purply art lately? Lookit these two Bluefellows; overall they have almost the same color scheme as this one! xD 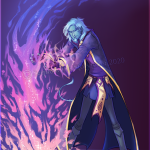 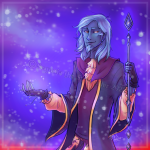 Posted on 15 November, 2020 by Sequoia the Storyteller

A bit of an altercation between a clearly very evenly-matched mammal and reptile! 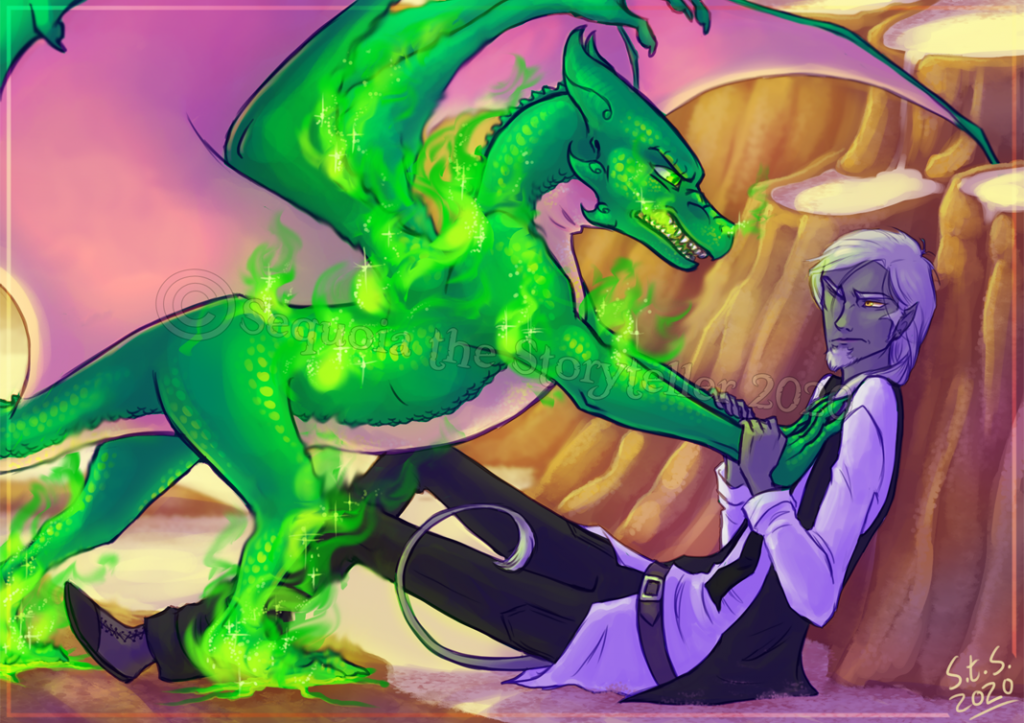 A Ways to Go

Posted on 3 November, 2020 by Sequoia the Storyteller

Have a doodle of Parch and Goat-Me swooping about! I named it after an appropriate song (linked below): 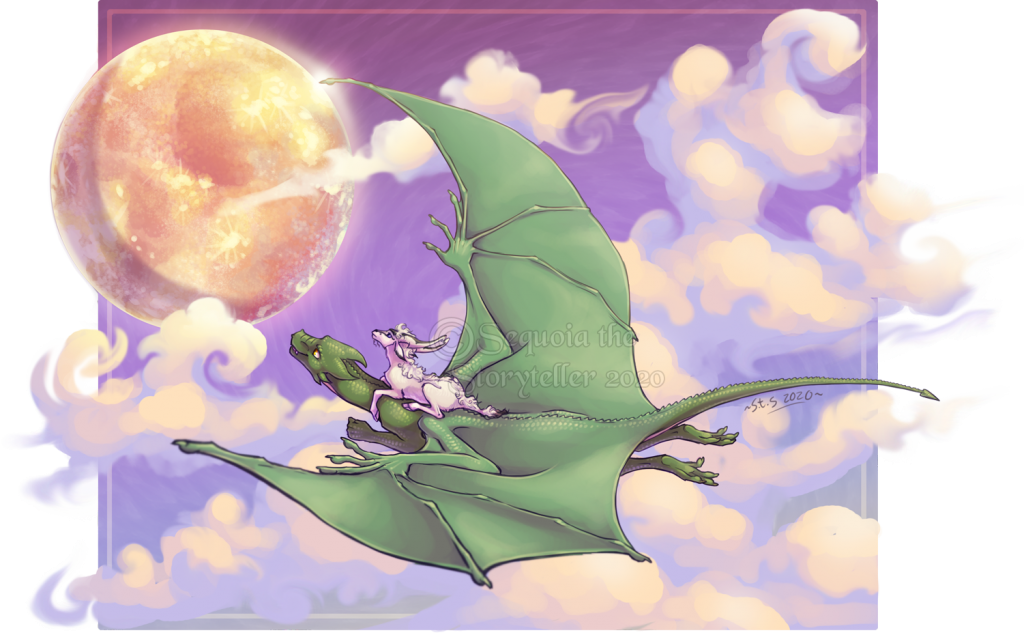 A Ways to Go

Even better that this song is sung by the guy that I currently consider to be Parch’s “voice” (talking AND singing!) ^w^

Posted on 1 November, 2020 by Sequoia the Storyteller

Here’s some art I did recently, featuring a certain kick-butt-awesome blue wizard from the Accidental Elemental universe, who is currently only known to the public as “Bluefellow” (or other things similar and equally vague, haha). ^_^ 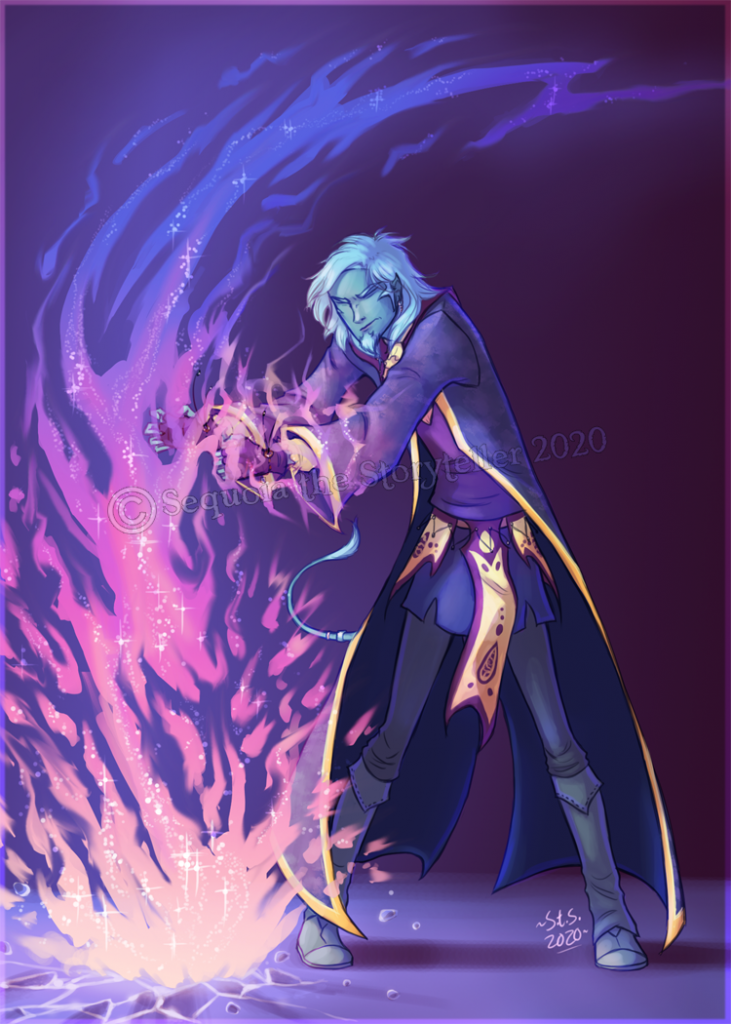 I decided I needed one of That Mysterious Blue Guy just being the kickass magician he is and SLINGING some magical weight around!! 😀 Before this one, I hadn’t yet made one where he was just throwing out some EPIC FLASHY EXPLODY magic, and that was a durn shame! I actually started this like… at LEAST a month ago, probably more, and thought I’d better go on and finish it QUICK, before it looks super-outdated (it’s on it’s way there already ^^; ). So here it is, NOW HAVE IT, I SAY!

www.youtube.com/watch?v=RZ4H0K… <–(PS: I find it weirdly awesome that in the same year I happen to start doing heavy concepting on a character who talks all “F O R S O O T H”, all these “Bardcore” songs start appearing! OuO ) 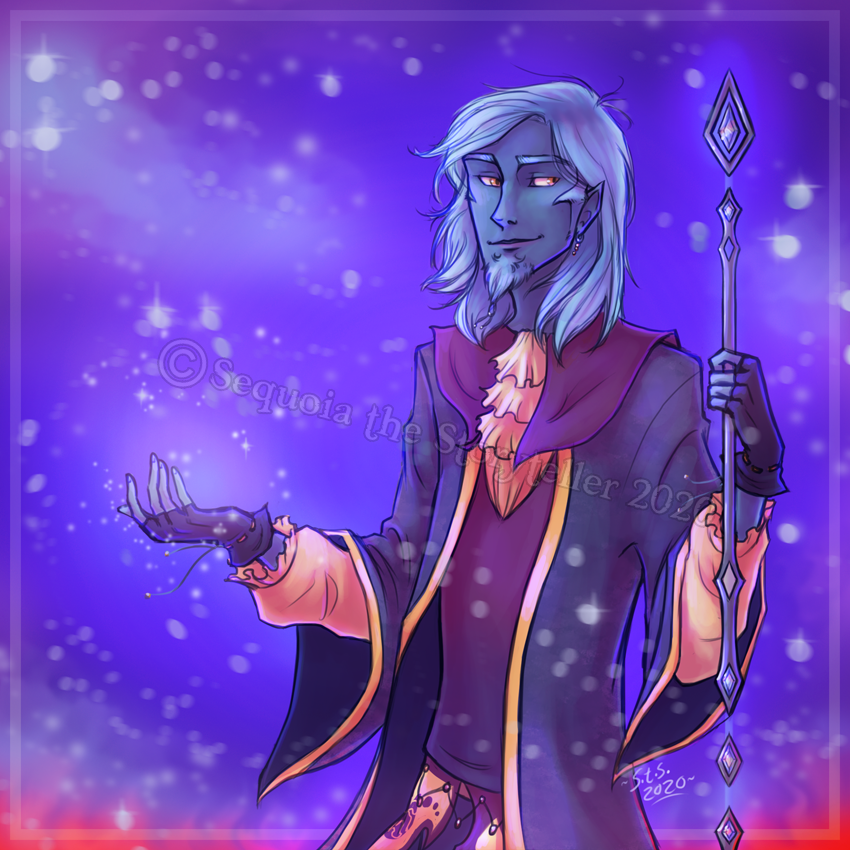 As you can see, I took a moment to draw “Bluefellow” taking a moment to look like “The Quintessential Wizard” (and nothing at all like a total Steamy Sam WHILST he’s about it! OuO  <3 *COUGH* Definitely NO Fangirling is going on over here, nooooope! None whatsoever! xD )

Any-WAY! I figure there’s only ONE thing that could possibly make him look even MORE Quintessential. In fact, I have it here! 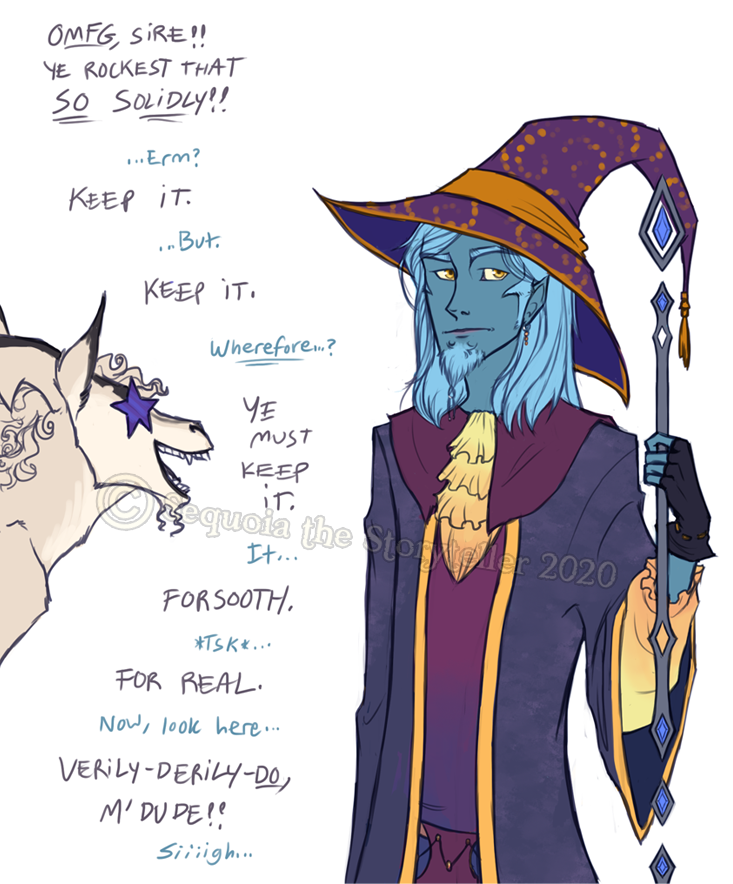 Ye must keep it

3: Testing the Dialect (you’ll want to zoom in on this one for sure!)

I made this as a way of testing out the “Ye Olde” way of speaking that Bluefellow and his people have on an audience (to see how well they could read/follow what characters were saying), without any story spoilers whatsoever. Too bad I had to color my test results by saying out loud how fond I am of this dialect and the idea of having it in the story. :’D Oh well, nothing to do for it now… x’D

Posted on 16 September, 2020 by Sequoia the Storyteller

I went quiet for several months on my own website again and here I am to prove that I HAVEN’T, in fact, been dead. x’D For starters, here’s a chunk of art + doodles that I have done since my last post (I added them to the Art page too): 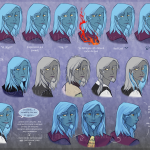 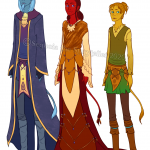 A Box of Crayons 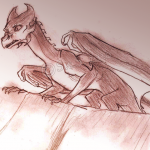 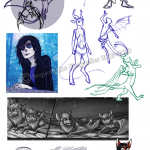 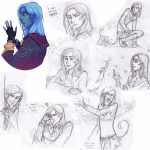 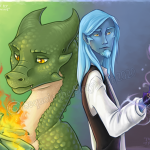 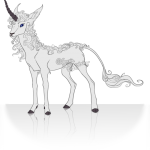 And secondly, I worked like a mad dog on Accidental Elemental this summer and manage to create… oh gosh, I think 21 pages?? Either way, it’s getting a good ways into Chapter One, and I am happy! I’ll show the chapter “header” and the first page here for a sample, but you can see/read through the fullness of the recent update-bomb here: 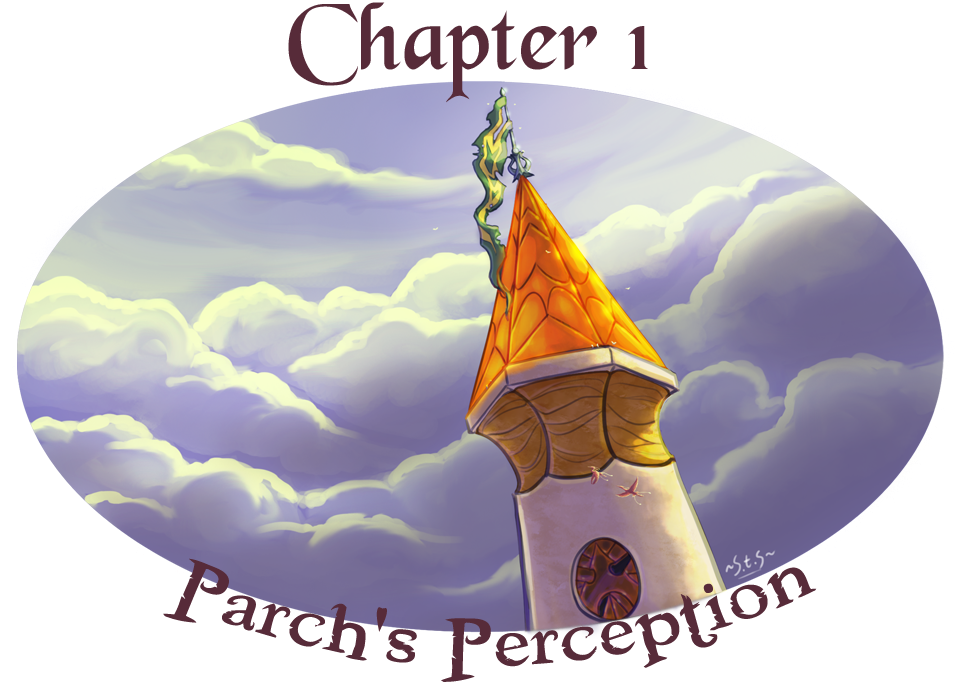 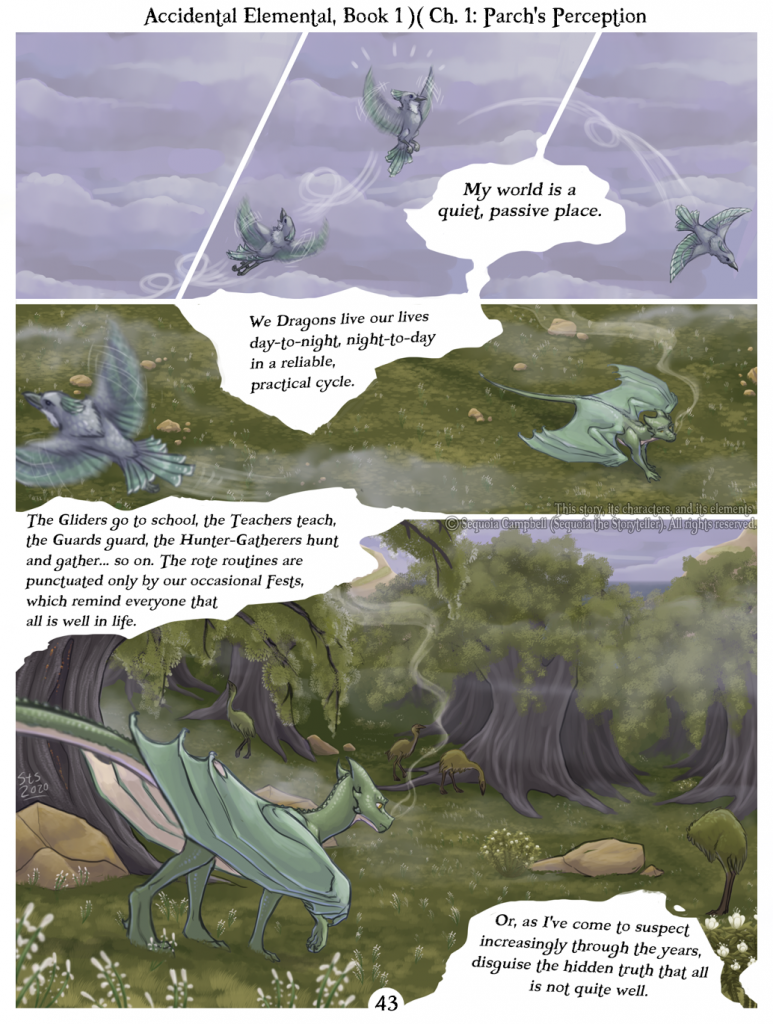